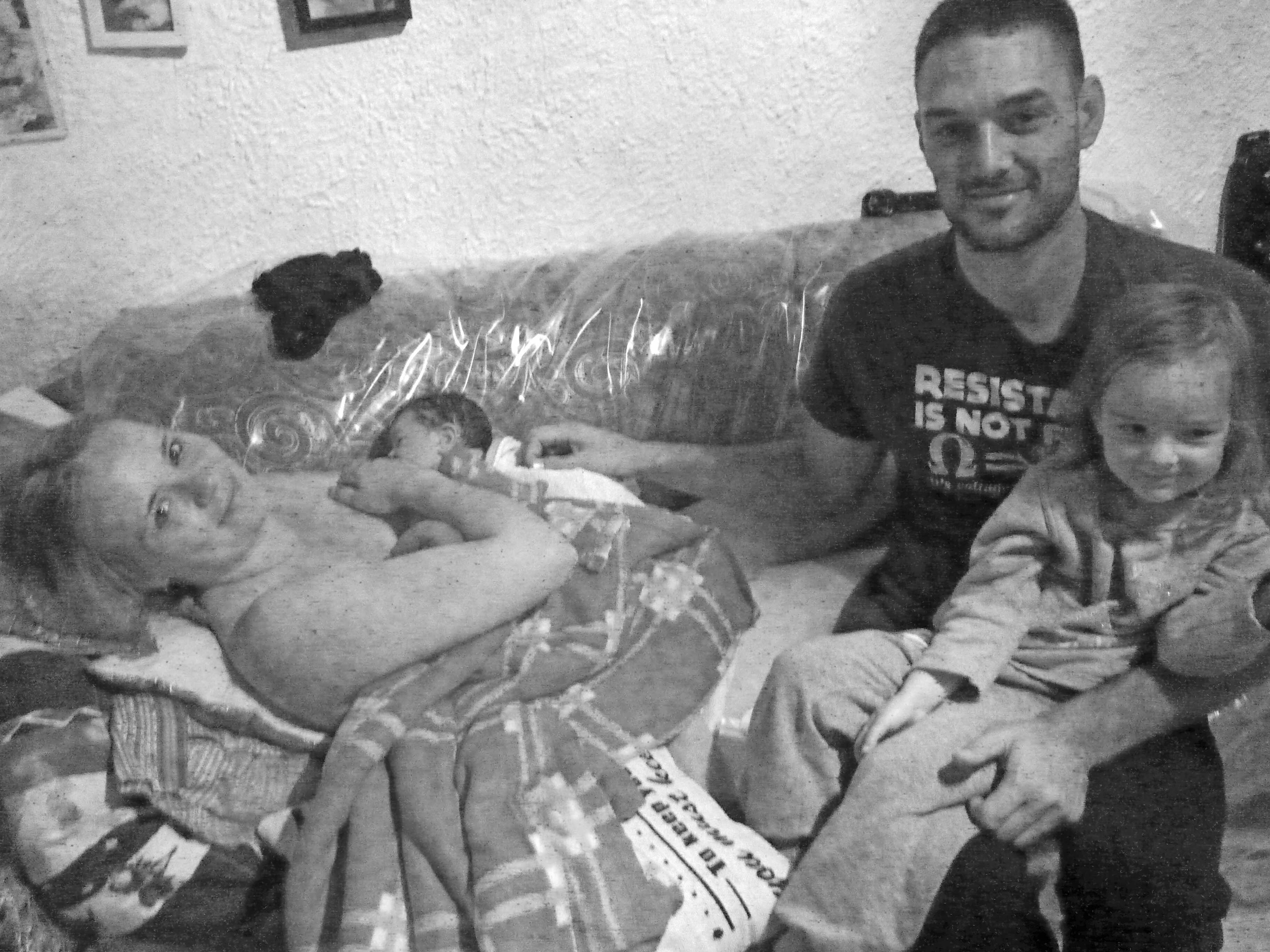 Posted at 12:25h in Ιστορίες Τοκετού by midwives
Share

My birth of our daughter Arya

After a not very nice first birth in a public Greek hospital I decided very early in pregnancy, that I would find an alternative to the slaughterhouse medical system in Greece. I was very lucky, because, despite all odds, there have been two very brave women in Thessaloniki that offered this alternative. Lina and Irene.

Those two have been always the emotional support ,that I needed to stay strong and to face all those believers, that hospitals are still safer then your own house. The health and hygiene situation in Greek hospitals is catastrophic and therefore I could convince also my husband to give our little unborn baby the chance to start her life in a warm, clean and calm environment.

It was Friday when I decided to show up in the nearest public hospital to register there, just in case we would be in need of a hospital later. On that occasion they took the chance and put me on the cardiotocograph and examined me afterwards with the ultrasound. Everything seemed fine, except the baby’s size. It was to big they told me. I had done already TWO sugar tests in order to find out if the size of the baby related in any way to pregnancy diabetes, but the results seemed always fine. And that day, they wanted me to do a THIRD one! Were they mad? Not only that I would have to cover the costs completely on my own, because the insurance had already paid for two. The baby was head down, but seemed not to be deep enough in the pelvic bones in order to be born. When I left I was devastated. Baby two big, head in the wrong position. I was about to cry.I called Lina and Irene. They calmed me down, they always found the right words.

The weekend passed, I kept talking to my baby, that it shouldn’t stay too long anymore in there. Next Monday I was supposed to go to a follow up appointment to that hospital but I refused. I simply stayed in bed. I decided, until that baby was born, I would never consult a doctor again.

The day passed and around 8 o’clock in the evening I sat down in our massage chair, while talking about something to my husband, and I was massaged at my lower back. There were some strange pains, that I felt but couldn’t sort them out properly. I had Braxton-Hicks contractions since the 28th week of pregnancy, therefore I didn’t take them seriously. Around 11 p.m. I woke up because my eldest daughter was crying in her bed. After I put her to sleep again I started realizing, that the quality of the pain had changed. It actually did hurt now. I was wandering around, thinking to call, or not to call? I didn’t want anybody to rush here on false alarms. Anyway, I called. Irene told me, to take a hot shower and see if the pains would stay or not. They did. I called them again, they said “We are coming Lisa!”. I called my husband to pick up our friend, that wanted to be at the birth, before he came home. Now I was alone in the night. Realizing that my birth journey had begone. I started to dress up, styled my hair, cleaned the flat, made coffee and tea, lid some candles and started to listen to my most favorite music. I also called my dad, who was on night shift, to tell him that are going to be four soon. All that interrupted by contractions every 2-3 minutes.

Around 0:30 am my husband and my friend arrived, both very excited. Then half an hour later, Irene and Lina joined us. The atmosphere was cozy, calm and beautiful. I was once examined, 5-6 centimeters dilation. It was great. Until this point I felt excited and great! But then…… the real pain came. I was slowly moving through the house, was told to move my hips in a certain way. At some point though, I couldn’t stand anymore. I layed down. But that was also a not very comfortable position. So I started kneeling in front of the couch. The light was dimmed, somewhere I heard my music, but couldn’t really be a part of my surroundings anymore. I was somehow just within myself, and within the process…. I once heard my friend asking, “when (or how) does she know to push?” and one of you answered, she will know. And what I realized after the birth, rethinking everything, really, the two of you didn’t say a word! Or I just didn’t hear it…who knows.

And then came the point of no return…. The point where you think, NOOOOOOOOOOOO, I can’t do that!!!!!!!!!!!!!!!!!!!!!!!!!!!! The body took over and started pushing. My mind was still working though. Naturally…we humans are mind persons. Even in labor we cannot make our stupid brain stop talking and thinking. There came the moment where I thought “No, if I push just one more millimeter, I will tear into two pieces”. A very…. very life threatening situation. But that ment, that the baby was almost born. And therefore, the body stayed being the boss and decided to keep pushing. It was a crucial situation. You have absolutely no choice anymore, it has to go forward. And for good reason I guess. Because how could a mind stay sane if such a situation continued for much longer?!? It impressed me afterwards a lot. It usually is the opposite. When you are in a difficult situation you seem not be able to handle it is “mind over body” that keeps you going. But here, it was the body, mother nature, that knew better.

The head was born, shortly after also the body. I was breathing heavily, couldn’t understand what just happened. My brain, my mind, was hiding somewhere because it had been turned off to make space for my body’s leading.

It was 3:25 am of the 8th of November 2016. She was giving me into my hands through my legs and I finally could lay down. I was so exhausted. Holding a newborn in my arms. I did it again. I couldn’t believe it. You could feel the tension leaving the room. Everybody started to relax. My older daughter came and welcomed her new baby sister. And she was all excited about the whole thing. Next morning, she told everybody in kindergarten about it and they played giving birth for about two weeks. Poor teachers 😀

The placenta took her time. About 1,5 h later she came. The baby stayed connected to her until she stopped pulsating. Then they could weigh her, measure her and dress her. Slowly slowly Irene and Lina packed their equipment and the birthing room became our living room again. Everybody tried to find a place to lay down somewhere and catch a few hours of sleep. Except for me. I just kept staring at my baby. I couldn’t find sleep. I was so relieved that it was over. That my sweet daughter had safely arrived. And all that without any interventions, medications, cuttings. Just by my body. And by Lina and Irene. In the end, they gave me the confidence to this birth at home. Never, never they took any risks. They were very professional and always reassured me and my husband. That everything went so smooth was a gift given to me by them. Thank you eternally, you two!